Bruges-Natolin UK European Scholarships Fund for the College of Europe

Lewis Reed has a First Class degree in Law from Durham University, where he graduated top of his cohort. At the College of Europe, he is studying European Legal Studies. Harbouring a strong interest in public, international and human rights law, he aims to assess the impact of EU law on national constitutional identity. Upon his return to the UK, Lewis will undertake the Bar Professional Training Course, in order to bring this new perspective to his career at the Bar.

Denise Osei has a first class Law with French Law degree from the University of Sheffield. Studying European law at the College of Europe helps her to appreciate how EU law blends world politics and law ​through taught courses, seminars, and networking with fellow students from all over Europe. Herself from an international background, she is interested in immigration law and questions of citizenship. Her ambition is to work at the Bar in the intersections of European and international law such as public law, and she has since studying at the College formed an interest in Competition Law.

William Spence (Law) is now a judicial assistant at the UK Court of Appeal.

Katherine Pye (IRD) is working as a Programme Assistant in Peace, Security and Defence at Friends of Europe, a Brussels think tank.

Susanna Garside (IRD) is working on an EU-funded project supporting civil society organisations in Uganda. She hopes to follow this with a traineeship at the European Commission or Parliament in an area that combines her interests in environmental politics and international cooperation.

Rebecca Pritchard (EID) is a Review Assistant with the Local Government Boundary Commission for England, ensuring electoral equality and effective and convenient local government. She is gaining a different perspective on governance to complement her knowledge of the relationship between the EU and local organisations and governments.

Charlotte Brett (IRD) is a Consultant at the Brussels office of Flint Global.

Joel Mason (IRD) is now a trainee in the communications unit of DG DEVCO (Development Cooperation) at the European Commission.

Anna Wilson (EID) is now a social policy researcher in the UK.

Samuel Kerr (IRD) is working at the New Statesman after working with the humanitarian arm of the European Commission (DG ECHO). 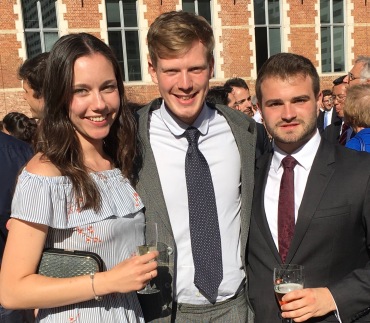 Recipients of BRUNAT Scholarships at a reception in Bruges in Summer 2017.

Zoe Grimes (POL) is  a senior policy adviser in the Department for International Trade.

Adin Samson (IRD) works in Brussels in the UKREP.

Roland Scarlett (EPA) is focussing on European and international law as a trainee solicitor with Clifford Chance.

Alex Braley (EPA) is in the Foreign & Commonwealth Office, currently in Brussels at UKREP.

Jonathan Peters (IRD) has experience of working closely with the European Parliament and is in the Department for Exiting the EU in London.

Zara Reid (IES) is Head of the Child Protection Unit, part of the Consular Directorate at  the Foreign & Commonwealth Office.

Andrew Wright (LAW) is  a judicial assistant to the President of the Queen’s Bench Division in the Court of Appeal, having been selected for his EU expertise.

Simon Budden (EPA) works in Communications in the European Parliament in Brussels.

Oliver Hodgson (LAW) is with a London law firm.

Alex Keynes (EPA)  works in the European Parliament in Brussels.

Emily Murrell (IRD) is now International Affairs Officer for the World Bank Group’s Special Representative to the United Kingdom and Ireland, leading on the portfolio for climate change, the environment and sustainable finance.

“It would be no exaggeration to say that my time at the College has been perhaps the most memorable and rewarding 10 months of my life so far, both academically and socially.”